Hi everyone, short time lurker, first time poster, I'm looking into some H4 headlight housings and I'm curious of you all's opinions/experience, I have a bunch of info so hopefully you all can see my motivation for changing them, hopefully I can gather some information on some good ones for me to purchase. I could in theory go LED or projectors but I'm not interested in that much work and trouble right now, I even read some reviews on Amazon on LEDs that replace H4 bulbs and none seem DOT approved (blinding oncoming driving seems unsafe for me and others so I don't want that) and many seem to have downsides like FM radio interference...which seems odd to me.

I got to watching this video from Donut Media about headlights, the housings I have currently seem to spread the light out too much to be effective and I'm looking for a better solution. Here are the main highlights...of the headlights


Options I've found
Obviously there are tons of replacement housings on the market, these are just a few, prices are in USD as of 2021-07-11:


Photos of my current setup The bulb that was originally installed, no visible brand name 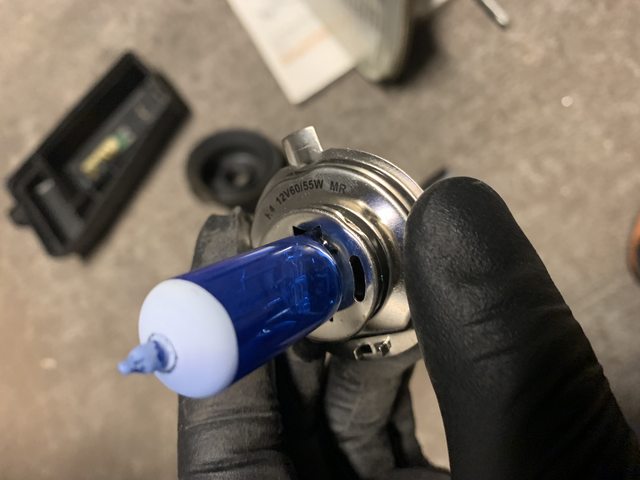 All of the stuff that needs to come off, the English owner's manual I bought mentions to pop the fuse before starting so I did that too, that's my flashlight on the bottom. 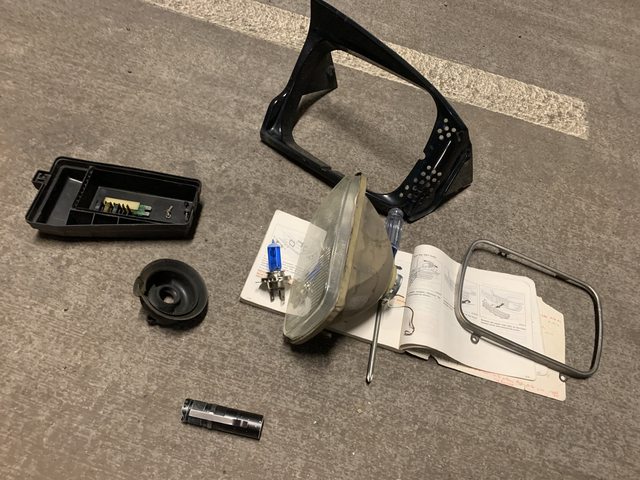 This was the best I could do for the first attempt, I aimed slightly above my tape line because the garage I'm in isn't completely flat, I didn't take a picture of how the car came but it was super low and aimed to the left (it's a JDM car so the aimed to the left makes sense) with the blue bulbs and the light aimed essentially at the ground in front of me I pretty much couldn't see anything on a night drive when it was raining. 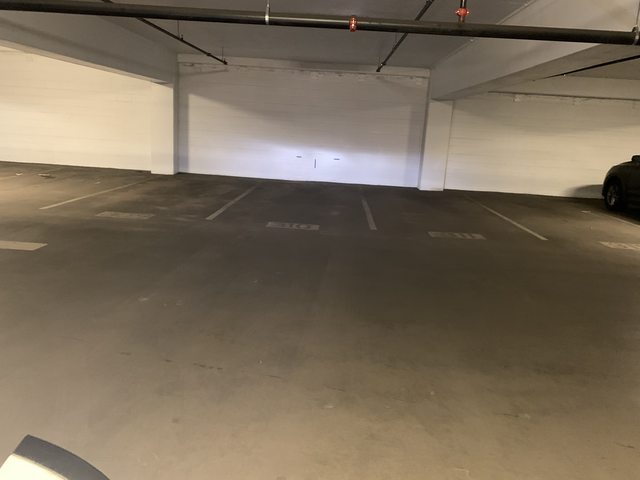 Switching from the blue bulbs 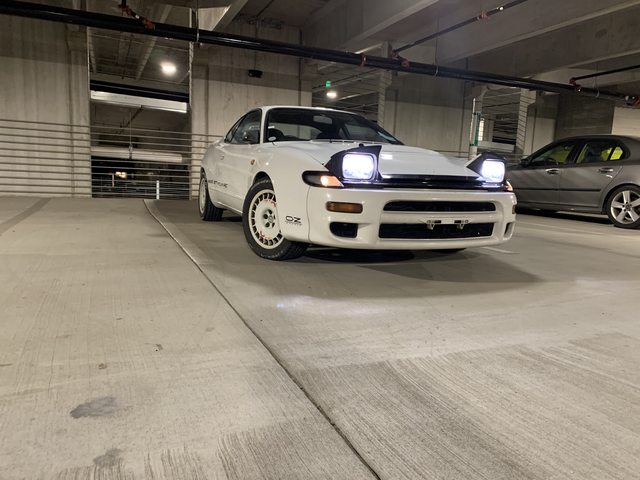 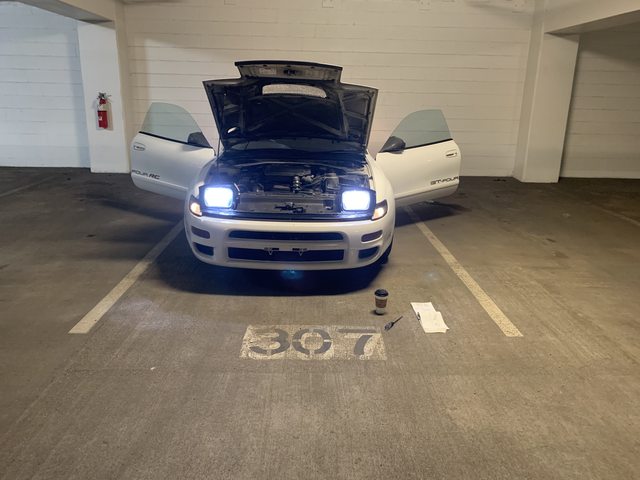 Here are the bulbs I'm running now, I think these have some sort of break in period because the first few times I drove at night with these it doesn't seem like they were all that improved but now it sure seems much better. These are the same ones my other car uses so I just grabbed these from my trunk, I have the blue bulbs in my other car as a spare, if I need them and they're terrible on that too I'll throw them out 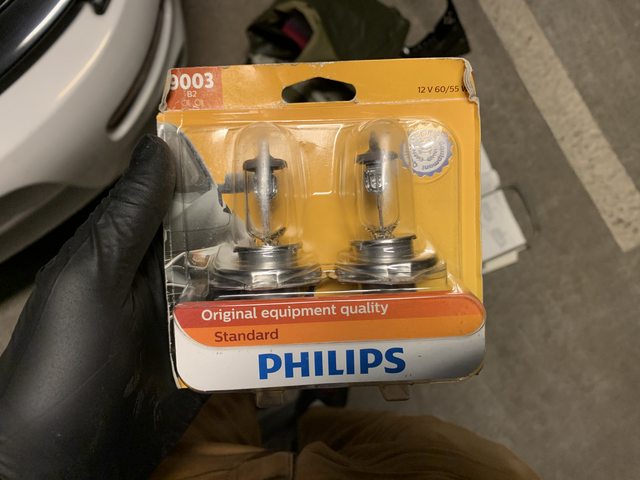 The nice thing about the regular bulbs is they last a reasonable amount of time, I used to run the brighter bulbs in my other car but the low beams sadly are the DayTime running lights and they would burn out super quick. 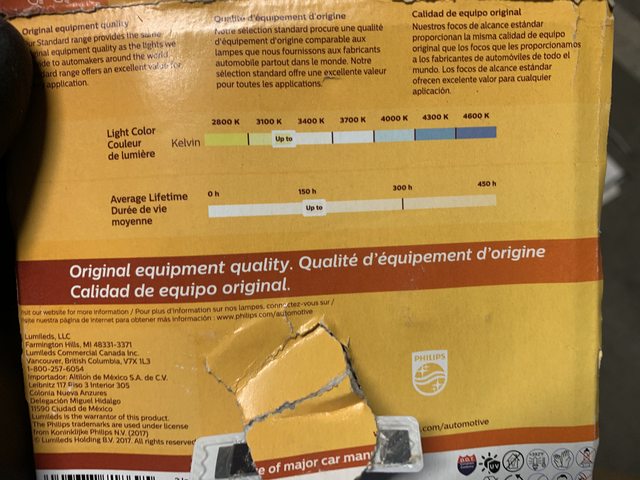 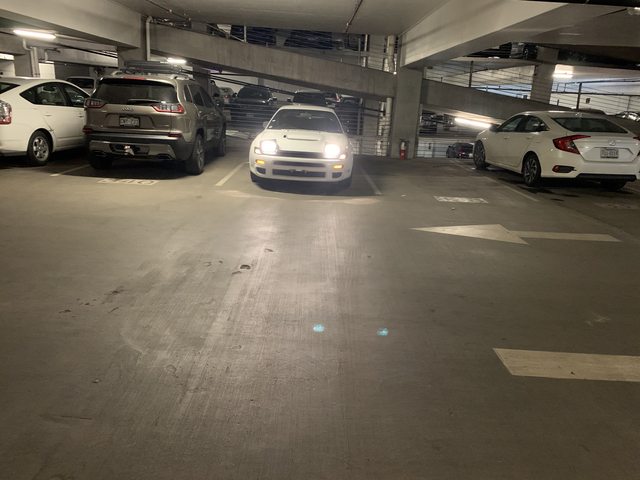 Way too high for the lowbeams 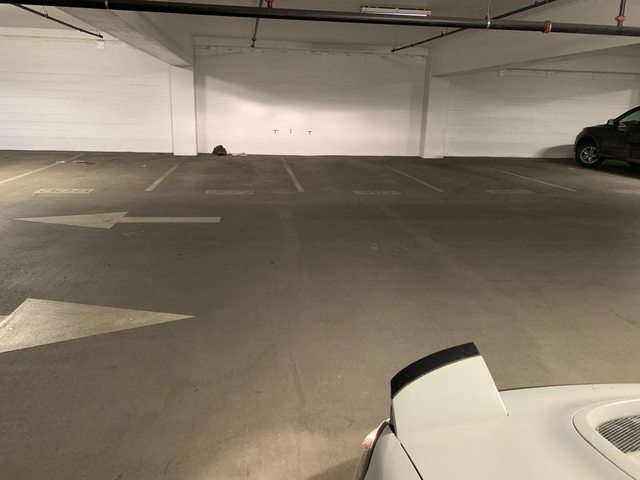 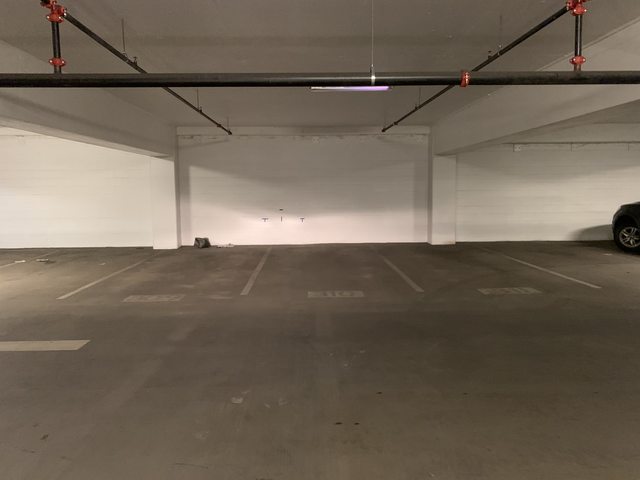 Welcome! Is it an imported Carlos Sainz RC or a replica? Super cool either way!
92RC

It's an imported RC from Japan! I just picked up in May (I bought it in January), it has a lot of older mods but it doesn't seem too far from stock (lowered suspension, front and rear strut tower bars, a separate front bar underneath, an old school boost controller, battery in the trunk, a few other odds and ends), it's a real homologation version and a blast to drive! The fuel pump has been bad since I got it but it's now undrivable because of it so I bought a Walbro 255LPH replacement thanks to this page on AllTrac.net (although the actual model number seems to be missing from the page, I talked with their customer support on the phone and actually asked about some of the downsides mentioned on that page, the person I talked to was like "our fuel pumps have never had problems at 12v" and mentioned if I wanted to go with the 255 vs the OE I will have more overhead for power but at mostly stock my fuel economy will drop just a bit which I'm fine with). It actually was failing on the 1,000 mile drive from the port to my home but I had no idea until it got bad the other day. Beautiful! That steering wheel is so perfect.
92RC

simple wrote:Beautiful! That steering wheel is so perfect.

I think so too, here are some more pics, I probably want to pay to have the leather redone on it. The thing that surprised me is the horn only works on the Momo Toyota logo, not the entire middle part. I haven't purchased them yet, but I plan to get the Hella conversion housings. Like you I want better lighting but I don't want to blind oncoming traffic and I want the light to actually be useful. Just dumping light everywhere doesn't actually help. Hella has been around quite a while so I trust that their stuff is actually compliant and well made.

I'm guessing the metal housings are considered a plus so there isn't a chance of them being melted by hot bulbs + not much airflow.

Gorgeous RC by the way, I wish mine was white. Maybe one day.
92RC

Makes sense, theirs are slightly more expensive and have a free return policy on Amazon so in theory I could buy them, drive at 11pm or something, install and aim the Hella units after that, drive the same route, return them if they're not up to par.

Thanks I love this thing! I wanted a white one because I love a white car with black accents (I didn't realize until after buying the thing people often go for the white so they can get the rally livery on it, I don't think I want to draw that much attention to myself so I don't think I'll ever do it), I think I want to vinyl wrap the mirrors to be black as soon as they arrive, the white paint on the 2 I'm receiving and the 1 I already have isn't that great and I think it'll look good. I considered a couple gray ones and I really would have liked a green one but I don't know if they were available/all that popular in Japan.

Here's my first good wash of it, it has some subtle black/brown drips in the paint so I'll need to claybar it when it cools down and wax it, it's also super dirty in a lot of the nooks and crannies like underneath the spoiler right in front of the windshield wipers. I browsed some of your pics, I like your Celica a lot, those wheels go well with the black!
underscore

That's one way to do it, I'm curious what your findings are so keep us posted. Most of my vehicles have had sealed beam headlights and I'm getting tired of having fireflies in jam jars when everyone else is getting freakin' laser beams lol.

Thanks! White is my favourite colour for them too, the grey and green pop nicely as well. I actually don't really like black (it's a hassle to keep clean and it hides all the details) but I kinda fluked into this car a bit. I'd love to repaint it white but that's pricey to do even half decently.
grip-addict

appreciate the writeup and your car looks great! nice pickup

I'll probably be buying some housing and new bulbs myself here soon, because who is ever done modifying their car?
MacGyver

Nice car! I switched my housings over to some clear ones I found on ebay a while back. That made a big help. I still have the box my bulbs came in and I was really happy with them. I'll find the info tomorrow for you. Not having the housings disperse the light made the most noticeable difference to me. Also there is a drop in replacement from a company called "trucklite". It's an led made for older semi trucks. Has high and low beams. They are pretty pricy if I remember correctly.
92RC

Thanks MacGyver, yes any info you have I'll take it! I did a quick search for Truck-Lite and sure enough $175 for a single light (only 1 in stock at time of writing, part number 27450C), here's the link https://amzn.com/B007ED7HNY

I read the Amazon reviews and other than the price most of the complaints are winter time driving, because the lenses don't get that warm ice and snow will build up over time and cause visibility problems, I don't plan to drive my Celica when it's snowing but it's a thing to consider. Also they're plastic which is a bit of a bummer for me, not that it makes a huge difference. Similar LED housings are not a look I want to go for (see the below embedded image, the giant lenses or the little LED diodes are too utilitarian for me, I don't want my Celica to look that modern or retro), at least the Truck-Lite and the this particular pair (https://amzn.com/B074LT5B1M I should also add many people compare these particular housings to the Truck-Lite and the Hella H4 housing specifically mentioning both price of the Truck-Lite and the brightness of the Hella) have a minimalist style that I like and would go with. I have the Truck-Lites on mine and love them. One other thing to consider is the lack of current draw (I'm no electrician so whatever it is) with these. Because of that, when the high beam is used, unless you have added extra load to the low beam circuit, the high beam indicator will not illuminate.
92RC

FC Zach wrote:I have the Truck-Lites on mine and love them. One other thing to consider is the lack of current draw (I'm no electrician so whatever it is) with these. Because of that, when the high beam is used, unless you have added extra load to the low beam circuit, the high beam indicator will not illuminate.

That makes sense, could that be fixed by using one of the high voltage wiring harnesses? I read a similar comment on the cheaper Truck-Lite knockoffs on someone's XJ which might make me not want to go with them, I'm sure that's a silly thing but I'm lazy at the moment, I don't want to jump into too many electrical things yet although looking into this now will obviously get my feet wet on when I want to do stuff like this in the future (I assume I will want to down the road).
FC Zach

It's a simple fix. For me, I just added 194 bulbs/sockets to the connector for the low beam circuit and that was enough to fool the electrical system so that the high beam indicator illuminated when in use. There are other ways too, like resistors but those get hot. . . Small 194s don't get near as hot so that's why I chose that route.
Post a reply
Switch to full style