Bringing a ST185 back from the dead one last time

Bringing a ST185 back from the dead one last time

! Buddy of mine is building a MR2 with a caldina motor in it, and he happened to find me this little gem in LA down town...

So I bought myself a 1990 ST185 (212K miles) with what the young kid that owned it before me said was a blown head gasket. He even included a Permatorque head gasket when he sold me the car for super cheap. Kid said that it leaked coolant and over heated on him one day, so he limped it home, parked it and then it wouldn't run again

. I bought it in mid may, the tags are good until JAN 2017, and he had proof it past smog in January. He told me end of april the car died on him and he just wanted to get rid of it and was done with it. I got the car with a blitz BOV, some walmart looking head unit that still works thank god, a set of TRD brake pads in the trunk for an unknown vehicle (need to search the Part#), and the best part The OEM repair manuals complete with the electrical manual as well!!

Towed it home and started watching the Love horse power videos a few times and started digging into the car already. I'm not a tech, not certified whatsoever but, I got the tools and a little experience so i said why not try and fix it before I buy a new motor. Basically I have a very low budget and only bought the car because it was STUPID cheap, and figured I'd be a long term project. I have three choices at this point #1 attempt a fix, remove the head get it clean and tested at a local shop, replace the hoses and gaskets and if everything checks out with the head slap it together and see if it runs. Will cost me less than $500 for everything as I will do most of the labor. If it does run well then i'll be proud I tried and i'll be cruising the streets in no time

. Option#2, save a little and buy my buddy's mr2 3S-GTE with a blown HG that's already removed from the car and slap that into my car, cost might be closer to $1000+ range. Option#3 save for the rest of the year, sell my first born and buy a ST205 motor and mod the crap out of it and make it a 400AWHP monster. I have 6 weeks of free time and not much money so I think option 1 is the way i'll have to go. I have a toyota tech that lives next to me so if I get stuck he's only a text away lol.

First off be 200% sure it's the headgasket before you pull it too far apart, it seems that most people instantly assume overheating = headgasket.
awdmofo

underscore wrote:First off be 200% sure it's the headgasket before you pull it too far apart, it seems that most people instantly assume overheating = headgasket.

So, Pulled off the hood so it was easier to reach things and I didn't keep hitting my head on it. Pulled the plug wires only to find all but cylinder 1 covered in oil. Pulled the plugs and they were very burnt and old, had some oil of course on the threads too. Engine is very dirty, oil leaking slowly even though the cars never been turned on in my garage on the floor. Pulled the distributor/cap/rotor/ out removed the throttle body, EGR and cruise. Finally was able to get the valve cover off. As you can see if you look really close the oil has what seems to be coolant mixed in with it. Looks like a dark milkshake, like coffee color and it smells bad like burnt oil.

Other observations...
Opened the radiator cap only to smell what seems to be gas

.
Played with the turbo

seems to have no shaft play at all that I can tell up/down or left/right but it spins freely.

Pics show the wires covered in oil, and what the head looks like with the VC removed. Any thoughts as to what else this could be if not a Head gasket?? I'm thinking at 212K miles, its worth the time I have off of school to just remove the head, get it tested, cleaned, and adjusted, replace all the belts and hoses and gasket I can then slap it back together and crank it up.

At 212k miles I'd probably just pull the motor and do a gasket/bearing refresh on it to be safe, when you know the car has had neglectful previous owners it's hard to trust anything you haven't replaced yourself haha. That said I'd suggest trying to patch it back together and get it running and driving the way it is now so that you know what other issues are hiding. Just do some basic things that will transfer over after any rebuild work (ie plugs, fuel filter, cap and rotor, etc).

It doesn't have to run well, just well enough that you can check that all the electronics are functional and the rest of the drivetrain is in good shape. The last thing anyone wants is to pull it apart, do something like a headgasket, and then find out the transmission is junk or the wiring harness is trashed.
awdmofo

. I didn't even think about the bottom end at all, i've seen how easy it is to pull the oil pan and get at the pistons and crank, just didn't think i'd tear into that unless it was needed. But as a precaution you think just the bearings should be replaced? Was debating putting new stock pistons and rings in, but like you said I just want it to be running until next year when I buy a new motor (ST205) and build that 400hp monster. I'm going to japan in sept, my brother lives there so who knows I might come home with a new motor or a clip then

. Just wanted to get it running at this point, I see that the passenger side CV boot is ripped, but the electronics all seem to work fine. Lights, turn signals, stereo, side mirrors, wipers, ect. AC blows but haven't been able to test if the compressor is still working. Just hope when the heads off the block isn't cracked and the head isn't wrapped. then i'd be

If the headgasket is bad there's not much point putting the money into replacing it or the bearings when you're gonna chuck the whole thing shortly anyways, I'd just slap it back together as cheap as possible and run it as is (if it can be run).
awdmofo

That's how I kinda feel about it, just want to get it running on a budget. Im visiting Seattle for a few days, next week I'll pull the head out and take it to a shop to have it measured and cleaned up if its good to go. I just thought I wouldn't mind spending a little now to replace things like the bearings if they are easy to do so that I don't get it running for a week then those go bad and its down again.

SO... decided to devote some time this week after work (2-3) hours a night to get this head removed. Last night I drained the oil (rather the coffee) and drained the radiator. The coolant looked like Flint tap water

I think the kid before be just kept throwing water and not coolant in the car and it started to rust a little. Removed the EGR only to find it has broken off at the connection to the head

. Removed the coolant neck and hoses attached, removed the strut brace, and removed the cold start injector line. Next is to remove the intake manifold, timing belt cover, timing tensioner and Timing belt. Maybe tomorrow I can start working on the turbo and exhaust manifold. 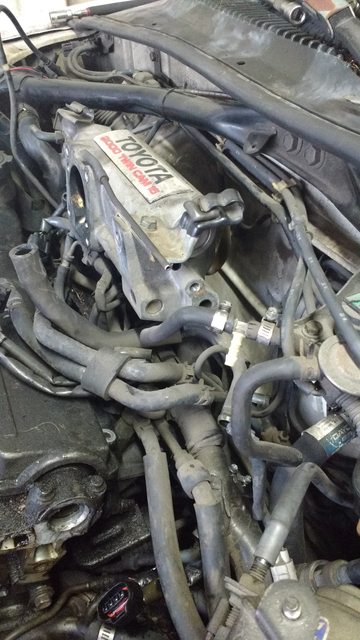 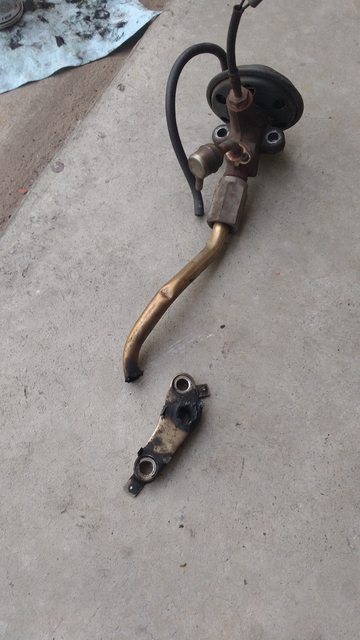 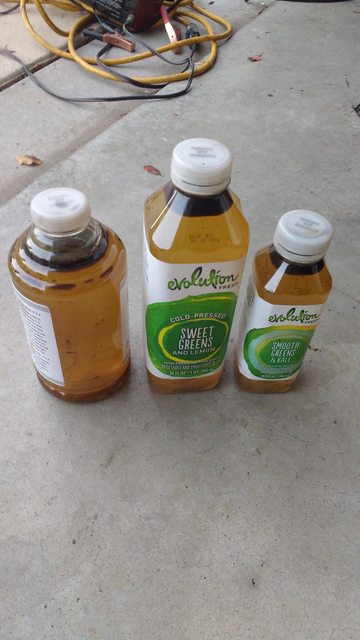 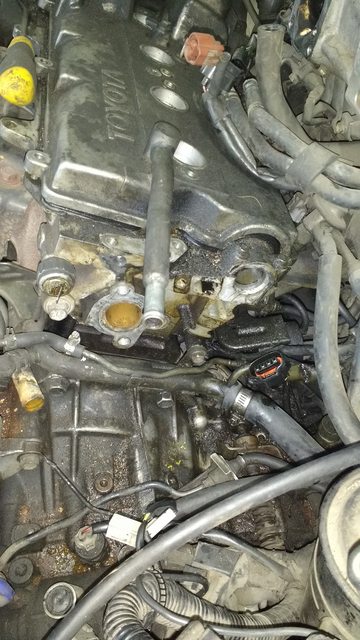 Removed the alternator and belt, the turbo cover, battery, and started to remove the fuel filter and now its not coming off. Looks original so might take a while. Next will be the turbo and intake manifold. 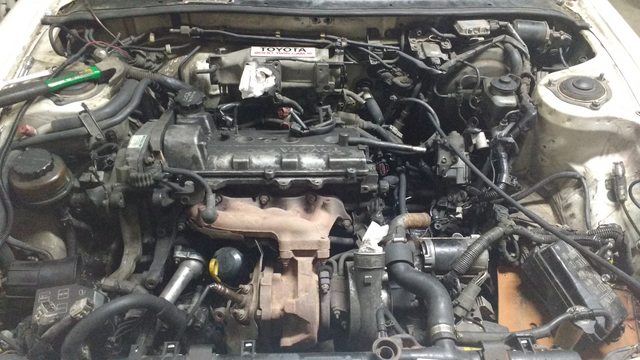 You mock my DIY allen sockets, yet the only tool I can see in that shot is a construction hammer

underscore wrote:You mock my DIY allen sockets, yet the only tool I can see in that shot is a construction hammer

you can't see the other tool, I believe its called a corona

. Yea, I guess at this point im more ok with spending a little money to get the right tools to get this car running sooner than later. Its been sitting for almost 2 months and im dying to hear the blitz BOV again

2 months isn't too bad, but I feel your pain. That engine bay looks pretty clean all things considered, I'd have thought it would look a lot worse given the state of that coolant. It looks like gas, or cooking oil. Perhaps the guy heard about those veggie oil conversions but didn't know how to do it (or that it's only for diesels).
awdmofo

underscore wrote:2 months isn't too bad, but I feel your pain. That engine bay looks pretty clean all things considered, I'd have thought it would look a lot worse given the state of that coolant. It looks like gas, or cooking oil. Perhaps the guy heard about those veggie oil conversions but didn't know how to do it (or that it's only for diesels).

yea it sat for almost 6 weeks while I worked and was going to a 5.5 week accelerated college course online

. Finally got to start working on it and I'm spending about 3 hours every night now after work wrenching. Yea, I should have degreased and washed out the engine bay before I started tearing into the engine. Yea, I think the guy I got the car from was telling the truth about its history and it was running until may two months ago when the head gasket gave up. HAHA yea it looks like oil and coolant have been doing the dirty together in the engine.

Last night, removed the alternator bracket, the engine hook, coolant upper and lower hose, and the radiator. Started on the downpipe (stock first cat) and realized the oil cooler/filter mount thingy is in the way

. spent 30 minutes trying to take the rest of the turbo and manifold off with no luck. Called it a night at 11:07. 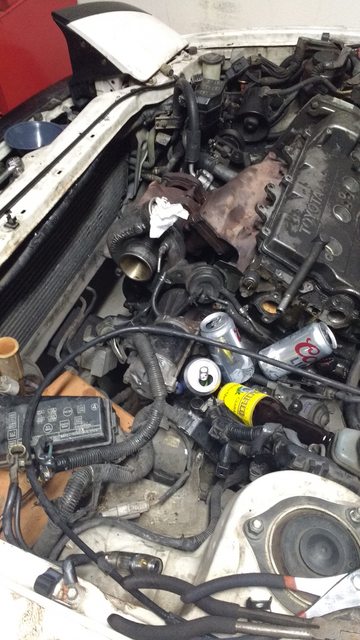 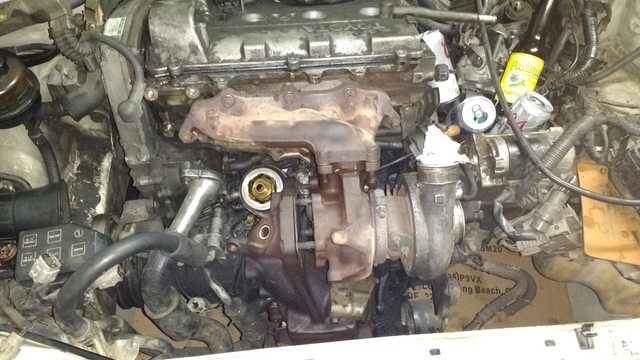 Looking good man.
The rust colored coolant is probably more from very diluted Toyota red than rust, judging by what I can see of the engine.
Post a reply
Switch to full style