1993 GT Coupe: no mods, essentially. Didn't have any kind of money to work on it and I enjoyed driving it as is. It was also my first-ever stick-shift car.

1994 GT Hatch: Started out with a barely-running car. Gave it some much needed TLC. Fast forward a year later, I swapped a 98+ 5SFE, and it had an eBay t3/t4 turbo setup on a Megasquirt-2, which made 214whp before blowing up cyl #3. Learned a bit about engines, decided to gap the piston rings and hone the cylinders to install the new rings on all 4 eBay pistons. That time, I was able to obtain close to 300whp on a TD06SL2-20G kinugawa internal-wastegate turbo. @ 21psi with meth injection, then blew up cyl #1 & 3. Put in a set of Arias Pistons, Maxpeeding Rods, ARP headstuds. ~350whp @ 27psi on a T3/T4 turbo again, this time a smaller .50/.48A/R, running a Megasquirt 3X tuned by myself.

Now, I own a ST185, back to my roots, but this time with traction on all four wheels like it should be.

With that little, non-detailed background of me, I will begin this build thread as sort of an interactive diary. Heavy mods are incoming for this car. I continue running this unmolested Gen2 3SGTE for a while. I will build a Gen5 3SGTE to swap it into the car for power instead. I would like to be able to sell this 92-93K current-miles JDM 2nd Gen 3SGTE with full harness and ECU.

Pics coming soon! Once I get them uploaded somewhere. Haven't been in a forum for a while.

First thing I did was some maintenance. Changed oils, fixed a bent rear trailing arm.

First mods were BC Racing BR Coilovers and 17x8 +40 Konig Hypergram in Race Bronze. This is how it looks now. 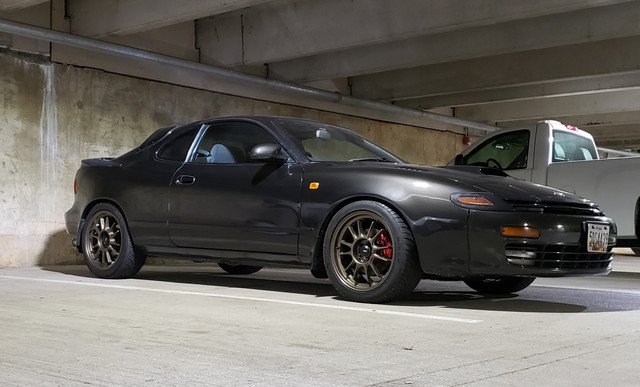 I also swapped out the front brakes from ST165 brakes that came stock on this (255mm rotor, 2 pot calipers) to the ST185 setup which is completely bolt-on as expected.

Gratuitous unmolested engine bay pic for you purists out there: